In Mexico, October 1st is celebrated as National Architect Day. Globally, the first Monday in October is known as World Architecture Day, with this year’s emphasis being “Healthy Cities, Happy Cities.”

In celebration of architects, we are proud to announce that Architect Plinio Rivero Lavín of Rocky Point 360, and current President of the Puerto Peñasco Architecture Association, recently made his way back to his Alma Mater, Autonomous University of the State of Morelos (UAEM) where he received special recognition for more than 20 years of “outstanding and brilliant professional activities.”

It was about three weeks ago that Plinio received a call from the UAEM Architecture department, requesting his presence in Cuernavaca so he could receive the recognition personally. He readily accepted, not quite grasping the magnitude of the event and simply pleased with the possibility of reuniting with a number of classmates and architectural colleagues in Cuernavaca, the “City of Eternal Spring.”

Back on his stomping grounds at UAEM, our very own architect was soon overcome with the importance of the day’s event. After being presented with the architectural recognition this morning, Oct. 3rd, Arq. Rivero Lavín expressed via social networks, “Wow, I was completely surprised with the recognition I just received from the hands of Morelos Governor Graco Ramírez, accompanied by the Director of my dear Architectural School, Dr. Gerardo Gama, the President of the Architectural Association of Morelos, Architect Carlos Infanzón Sánchez, as well as to greet my dear teacher and Region I representative of the Mexican Architectural Association (FCARM), Arq. Jorge Valencia, my dear friend and President of the Alumnae Association of the Architectural School, Efren Romero Benitez, and many more teachers and friends I have had the opportunity to see!” 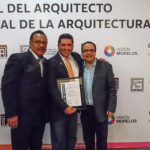